These are few of the best known, most typical Spanish foods. Each part of Spain, as you can see from this list, is known for different types of food, whether it’s seafood, meat, or vegetables. The regional variety is fantastic and goes far beyond this list. As I’ve highlighted before, one of the best things about Spain is the simplicity and quality of the food and the freshness of ingredients.

You should try a few of these foods on your next trip to Spain. Regardless of which part of the country you go to, more than a few will be available.

Tortilla española, or Spanish omelette, is one of the best known and most common foods throughout Spain. It is a simple, straightforward dish that is made with eggs, potatoes, and usually onions. It is frequently called a tortilla de patatas to distinguish it from a tortilla francesa, which is a tortilla made of just eggs, so basically scrambled eggs.

Some people prefer their tortillas without onions, so just with eggs and potatoes; this is the great tortilla debate! I think most people like including onions as they add a certain sweetness that gives the tortilla a balanced flavor.

A pincho de tortilla, or a slice of tortilla, is a common tapa in a bar and is a great way to accompany a drink. Every Spaniard’s abuela or mother makes the greatest tortilla on earth, so be forewarned that if you go around saying you’ve had the best tortilla ever, you’ll have people lining up to challenge that assertion! 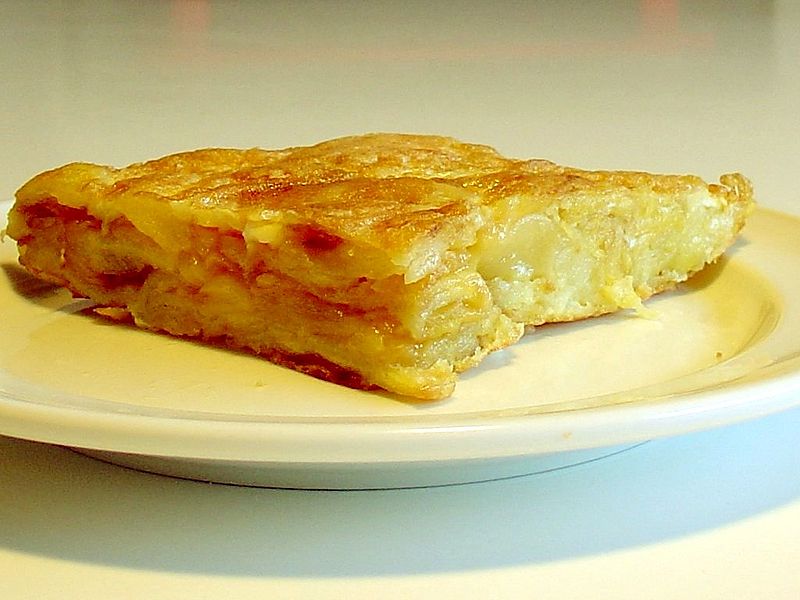 Spain produces the best ham in the world, hands down.  Ask any expert which is better, Italian prosciutto or Spanish jamón, and anyone will tell you that it’s jamón (seriously). Spain also produces 40 million hams per year, so they really know what they’re doing. Now, not all hams are the same. In fact, there are several important differences that impact flavor, quality, and price.

There are two main classifications within jamón  — jamón serrano and jamón ibérico. The ham comes from different types of pigs that are found in different areas of Spain. The curing process is similar and differecens in color, appearance, and taste are due to the differences in the pigs themselves and their diets.

Jamón ibérico, which is also known as pata negra because its huffs are black due the diet of eating acorns, is considered by most to be the better ham. Jamón ibério de bellota, one of the subtypes of jamón ibérico, is considered the best Spanish ham and likely the finest ham in the world. These pigs have have luxurious lives where they roam free over beautiful countryside in Extremadura while they eat their special diet of acorns. The ham from these pigs is then cured for a longer time than other types of ham.

Many Spaniards, including my family members, have a leg of ham in their kitchen. It’s common to buy before the holidays since you eat a lot of ham during all of the fancy and special meals of the holidays. You need a special ham leg holder that supports your ham and you’ll keep it covered with a cloth to protect it when you’re not eating, since it sits on the counter at room temperature. This way, you can slice and eat ham at your convenience throughout the following year.

In North America, jamón ibérico de belloa hams are extremely expensive. La Tienda, a Spain specialty store based in Williamsburg, Va that ships anywhere in the US, is currently selling this type of ham for over $1,000 a leg. They sell jamón serrano for a much more reasonable $300-$400 per ham leg.

Gazpacho is a delightful cold soup that is typical of the Andalucia region in southern Spain, though it’s eaten everywhere. The basic ingredients are tomatoes, cucumbers, peppers, a bit of bread, extra virgen olive oil, white vingar, and salt. Recipes vary a bit and some include other ingredients, but these are the basics.

You can tell this soup is typical of the South for two reasons — it’s based on fresh vegetables and it’s light, extremely refreshing, and meant to be served cold. The region of Andalucia is one of the largest growers of fruit and vegetables in Europe, so it makes sense that an Andaluz soup would be based on fresh produce. In the summer, Andalucia is incredibly hot. It’s a dry heat, searing heat and nothing is as delicious on a hot summer day when you sit down to a late lunch, as a starter of cold, delicious gazpacho.

Gazpacho’s relative, Salmorejo, is another cold tomato-based soup that is very similar, but thicker than gazpacho. It usually has fewer ingredients that its sister soup, only tomatos and garlic, and has more bread than gazpacho which gives it the thicker texture. I actually prefer Salmorejo because I like the thickness. Funnily enough, given that it is traditionally a food from the South of Spain, the best Salmorejo I’ve ever had is from a bar in León, Bar Madrid. You can see the thickness of the soup below.

Patatas bravas are a relatively straightforward tapa. They are small cubes of potatoes that come with brava sauce on top. The sauce itself is what gives the potatoes their flavor as it’s red and a bit spicy. It’s a typical dish from many parts of Spain and the recipe for the brava sauce varries throughout different regions.  This is another great tapa that is served in many bars.

Paella might be one of the most famous Spanish foods. It originated in the coastal city of Valencia so, while it’s now eat in many places in Spain, it’s traditionally from this region.

There are many different versions of paella and no one specific way to make it. Generally speaking, paella contains rice, vegetables, and can contain different types of seafood like the shrimps and clams seen above, or chicken, or both. Many families have their own recipes and own ways of making it, usually using regional foods. For instance, if you live in a coastal area, like Valencia or the north coast, it’s probably typical to add seafood to your paella because of its fresh and readily accessible daily. In interior regions that are more known for meat, it might be more typical to have chicken and less seafood.

Spaniards don’t eat paella or any rice dishes at night because rice is considered too heavy for an evening meal. It’s a mid-day, or lunch food, when people eat their big meals.

Croquetas are delicious bundles of fried yumminess. The look like breaded cyclinders, though occasionally they’re totally round, and are filled with bechemel and different types of fillings. The most typical croquetas have ham filling or cheese fillings, but you can find them filled with fish like cod, or chicken, or shrimp.

In fact, one of my favorite bars in the Barrio Humedo in León, called Rebote, serves croquetas as its free tapa. They have options ranging from the more traditional cheese filling, to morcilla (blood sausage typical of the region), chorizo, and pizza. Rebote is immensely popular because of the croquetas and a common stop on most night outs in León.

Why are croquetas so popular and common? Like many typical Spanish foods, they have their root in resourcefulness and not wanting to waste anything. During many years, Spain was a not a wealthy country and, during the worst of these times, many people didn’t have enough to eat. Croquetas are basically little balls of fried leftovers. They allow you take take what might have been scraps from a meal of chicken, meat, or fish that someone wouldn’t want to waste, and make a delicious treat. 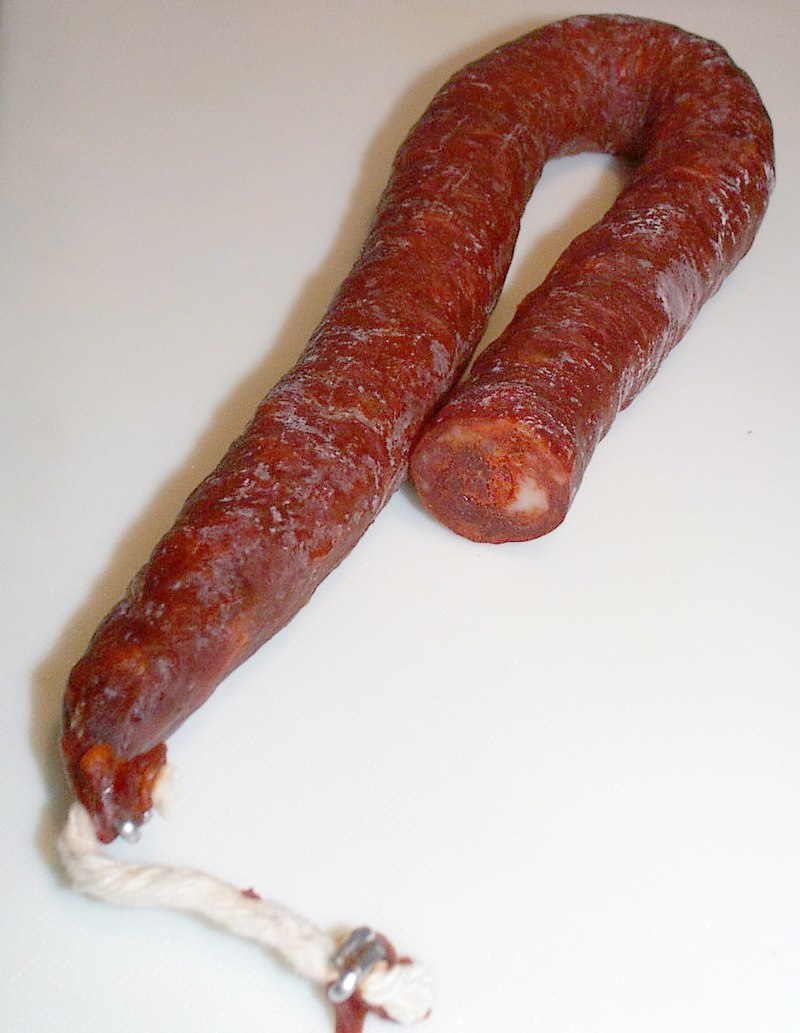 Spanish chorizo is another cured meat that Spain is famous for. It is made from pork and uses traditionally made, natural casings from the animal’s instestines. It may sound unappealing, but this tradition dates back to Roman times. Entire villages in Spain will still gather to go through the ritual of making the chorizo and it’s a process that uses every part of the animal and minimizes waste.

Spanish chorizo gets its flavoring and reddish color from smoked pimentón, or paprika. This one key difference that distinguishes it from Mexican Chorizo.

Different parts of Spain have different recipes for making chorizo. In some places they smoke the meat, others add pimentón dulce or picante, sweet or spicy paprika, or other spices.

It is eaten as a tapa, perhaps along with cheese and some bread. It is also added to other dishes to give flavor. For example, most Spaniards add chorizo to lentil soup as it gives the soup a delicious flavor and bit of kick.

Pulpo a la Gallega is a specialty of the north-west region of Galicia, just above Portugal. It is octopus, cooked perfectly, and served with the highest quality extra-virgin olive oil, paprika, and sea salt. It is unbelievably delicious and worth a try even if you never thought you’d ever eat octopus. It’s typical to have pulpo with a glass of red wine.

Pulpo a la Gallega is the most traditional and I would argue, yummiest way to eat octopus. Though it’s typical of Galicia, you can find good pulpo in other parts of Spain. Proximity to the ocean or to a seafood market that gets daily shipments is key as having fresh octopus is key.

The Galicia region of Spain is famous for its incredible seafood, which makes sense since it’s surrounded on all but one side by the ocean. 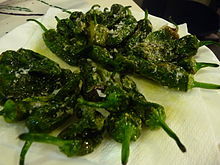 Pimientos de padrón are another common tapa that you can get in many bars throughout the country. They are small, green peppers that are roasted with extra virgin olive oil and salt.

You can eat them standing in a bar by grabbing the stem and pulling the flesh of the pepper off. They’re soft and well seared, so this is easy to do.

Now, here’s the fun part — the majority of these peppers are sweet, but every once in a while, you get one that is hot. It’s impossible to tell the difference, since they all look the same, so if you order a plate of pimientos de padron to share with others, it’s a bit like Russian roulette waiting to see if anyone gets a hot one. Don’t let this discourage you though! They are a tasty dish and rarely spicy.

Regardless of where you go in Spain, have a great time enjoying some of these amazing dishes.