I highly recommend spending a few days in Granada on your trip to Spain, especially if the Andalusia region is high on your list.  Planning a visit to the Alhambra is a key part of any trip to Granada. 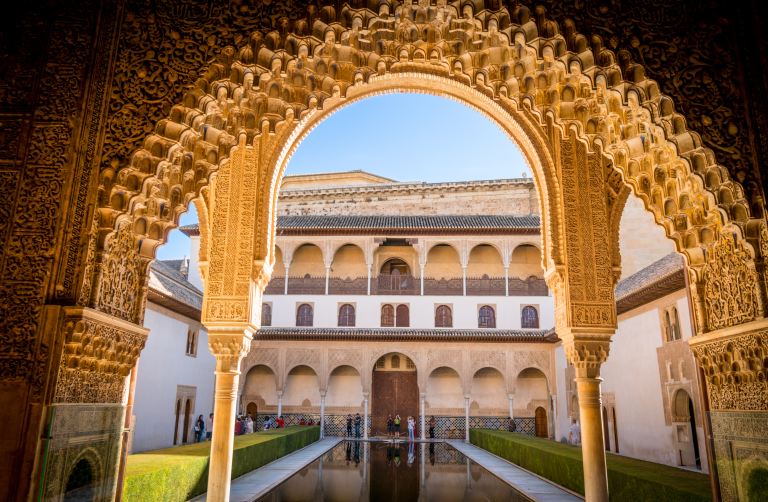 It’s hard to overstate how beautiful the Alhambra is. All of the stunning photos just don’t do it justice in real life.

I remember the first time I visited the Alhambra with my family when I was in middle school, an age where I don’t think I wanted to seem impressed by anything. On top of that, it was late June and it was very hot. Despite the fact that my parents had been once before (in the late 1970s, when no one outside of Spain really visited the Alhambra and you could walk right up to and actually touch the most famous carvings and statutes), my father was overcome by the beauty of the Palace. I distinctly remember him saying he thought it was the most beautiful place on earth. This feeling and sense of awe has stuck with me and, every time I’ve visit the Alhambra since then, I’ve been newly impressed and inspired by its beauty. 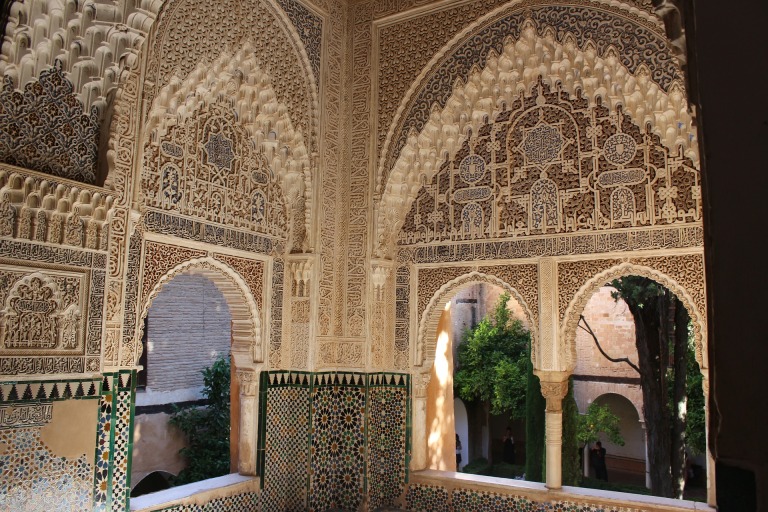 The physical structure of the Alhambra is very impressive and much larger than one might expect. The Alhambra is actually a compound of several different buildings and sections, constructed at different points in times and by different leaders.

The Nasrid Palace, one of the four main sections of the Alhambra Palace compound, which houses the famous Patio de los Leones, or the Lions’ Patio, is filled with unbelievably intricate Islamic carvings, beautiful tile work, and Moorish arches and doors.

The work is so detailed; it’s hard not to think about how impressive it is that the Alhambra was mostly constructed in the 1200s and 1300s and, that on top of the sheer beauty of the work, it was constructed well enough to still be standing and in excellent condition today.

The use of water throughout the Alhambra Palace, which is typical of Moorish architecture, is not only beautiful, but gives the Alhambra a sense of tranquility.  The Alhambra is nestled into the side of lush, green hills and the water adds to the feeling of being completely surrounded by nature.

The Moors ruled almost all of Spain for several centuries, starting in the mid 13th century. Their architecture, art, language, and culture impacted the Spanish culture and history of Spain for centuries and is still very much present today.

One great example of this is the many Spanish words that come from Arabic. Many  words that begin with “al” in Spanish have Arabic origins. Some diverse examples of common words are almoada, almendra, alcade, alcaparra, alfombra — pillow, almond, mayor, caper, and rug. One of the most used and most emblematic Spanish words, ojala, which is used to express a wish or desire, and comes from O Allah.

Visiting the Alhambra allows you to go back in Spain’s history to the time of Moorish rule. You will see and experience first hand the type of architecture that influenced so  much of Southern Spain with its colorful tile work, interior patios, graceful arches, and use of water. If you visit other cities in Southern Spain, you will see very similar architecture throughout.

Along with the Nasrid Palace, the Generalife gardens are probably the most well known and photographed part of the Alhambra. The Generalife is comprised of gardens as well as a palace, and served as the summer residence and of the rulers of the Nasrid dynasty. The palace section is worth seeing, but the gardens are the real start of the Generalife. You can spend hours walking around these beautiful gardens, listening to the trickling of water and enjoying a nice breeze.

After a visit to the Nasrid Palace, where you don’t want to miss any detail and there is so much to take in and learn about, walking through the Generalife is a lovely way to relax a bit and truly focus on the beautiful scenery.

The Alhambra’s tremendous views of Granada

Other than being incredibly beautiful itself, the Alhambra provides spectacular views of the city of Granada and of the Sierra Nevada mountains. The Moors built the Alhambra as a defensive fortress and chose the edge of a dramatic hillside that backs into the lower parts of the Sierra Nevada mountains because of this. Today, perched on the edge of a hill, the Alhambra overlooks much of the city itself. This provides sweeping views as you look down and across what is most of the downtown of Granada.

It can be hard to draw your attention away from the Alhambra itself, but it’s worth taking time to really appreciate the view of the Albaicin and the natural beauty surrounding the palace compounds during your visit.

The Alhambra is in Granada

Even without taking into account the majesty of the Alhambra, Granada is a magical city that is absolutely worth visiting on your trip to Spain. Of course, the Alhambra really adds something unique and other-worldly to the city, but the city itself is filled with  history, the story of three cultures, beautiful gardens, winding streets, delicious food,  and so much more.

There are the ancient Moorish quarters, the Albaicin, and the ancient Jewish quarters, the Realejo. The Albaicin is hilly and filled with narrow, winding streets, beautiful white-washed houses and quaint plazas. The Realejo, just down the hill from the Alhambra, is home to some of best tapas bars in the city and is a favorite of locals.

The city is filled with beautiful plazas and gardens and is quite walkable. Granada is also one of the few cities in Spain that offer free tapas with drinks in bars, making it a fantastic place to learn how to have tapas like a Spaniard.